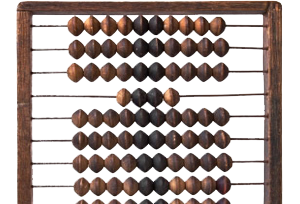 We've seen how money, banking and debt, in truth, basically work and we've considered a few conceptual ideas to strengthen our understanding of what is going on, what is going wrong and how we might fix it.

Let's now return to our original example and expand on the basic financial/credit system we built in section 1. We'll look more closely at how the creation, transfer and settlement of money is or can be accounted for. And we'll build the system up to capture more of the real world, including adding a government and a plurality of banks.

This is where we left our community:

Let's now introduce a government (which we'll assume is Mark, Jo, Cassie, Lauren and Sean themselves). We want to see government finances and government money creation in action, so we'll have the government simply credit each community member with 1000 units, either for no reason at all other than that they might have some money, or in payment for their contributed labor - perhaps for building some roads.

This action created a body of money (5000 units) which now allows community members to make savings without an accompanying real debt. You can see that this money creation is recorded as a debt. And for the purpose of continuing with banking conventions, we'll continue to record it as such throughout these examples. But here you can see why it is that this money is called debt and why it is, falsely, assocaited with 'lending and borrowing'. It is solely by these conventions that this language is used; it really does not mean that any of the community members, having earned or been given this money, should "owe" it back again. I discuss here how, even with debt-based currencies, public money creation is an obvious special case; if it can be described as a debt, it is a "debt we owe ourselves" and therefore not a debt at all. The community can theoretically create as much money as they like, their only concerns are to maintain 1. the fairness and 2. stability of the system. Overlooking such details for the time being, it's quite clear that the community just created some money, it did so democratically and doesn't "owe" anyone anything for doing it.

Some will surely object to governments being able to create money. However, someone has to. And every unit of currency created should be created fairly, democratically. In our example of government money creation, the government created a base money supply and allowed community members to make savings of an extra 1000 each, without having to burden anyone with real debts and thus demands for repayment. It also aided them in organizing themselves to achieve something in the first place, like building roads. Finally, just like anybody else honoring a debt, should it be necessary to do so, governments can always eliminate money by taking it out of the economy through revenues and out of existence. Here, the government's revenues are conceptually no different to Mark charging for his services as a roof repairer.

Those hierarchical or 'class' relations do not exist in our sample economy.

Our little community system has given us a good start in understanding how money, banks and debts really work. Let's now make it a little more realistic by introducing banking as a formal practice.

In the following examples we'll use a conventional accounting structure. But the reader may observe that the language and conventions are very much those of exogenous, rather than endogenous concepts of money. It remains entirely possible that better conventions could exist to account for the creation, circulation and eventual settlement of money.

We're keeping it nice and simple, so just one bank to cater to the whole community and still no physical cash stock; all money is no more than the non-physical numerical records you see in the tables and all payments are performed by instruction i.e. by credit/debit cards, checks, telephone, internet etc. We'll take the numbers from above and put them into a new table:

When somebody goes into debt, the process of money creation is captured by the bank creating a checkable deposit (spendable money) for that person to draw on, recording it as an 'asset' for the debtor and balancing it by their 'liability' to repay it. Commensurately, banks take a mirror position: they record that newly created money as a liability for themselves (as if they're 'holding' this money in a physical sense and have the liability to give it back) and record the credit agreement as an asset - a document which allows the bank to collect repayment + interest, as well as access the legal system if a debtor falls delinquent.

So, whenever the bank creates new money, we'll see all 4 columns along the row adjusted by the same number. This is why money creation by banks is often called a balance sheet expansion. Let's imagine that Cassie goes to the bank for credit of 2000; the bank's books would be adjusted to add 2000 to each column accordingly:

2000 new currency units were made available to Cassie, recorded both as an asset and liability of her own, but now also mirrored for the bank: Cassie's asset is the bank's liability and her liability is the bank's asset.

If you've seen the first of our little pieces 'How Money Really Works', you'll know that we can perform any operation required on these numbers, any transactions, as well as facilitating any reasonable level of debt for any member, without any need to invoke language like "lending" or "borrowing". No actual lending or borrowing is necessary to facilitate this community's debts or, as you've seen, any pulic money creation. All processes consist either of creating numbers, transferring those numbers by instruction (by debiting one account and crediting another), or eliminating numbers when debts are paid down (positive numbers paid into negative balance accounts cancels money out of existence). So, even though we've introduced a government and a bank, we've retained what we started with: an honest, inclusive and interest free financial system which can accommodate all community members and a government without anyone having to "borrow" anything from anyone.

We've showed that banks can serve a community, that introducing them into our model didn't have to condemn us all to class hierarchy and systemic usury. In the next section we'll develop the model to introduce a plurality of banks.