The Fountain of Money at the Heart of All Economics 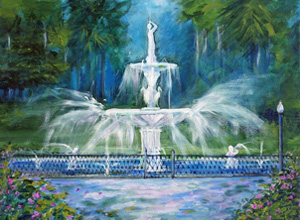 This one is just a little conceptual aid, for those who might benefit from it. I think it can help to make sense of economic reality and aid in breaking down some unhelpful economic myths.

I'm sure you've heard people say "Money doesn't grow on trees!" "There's no such thing as a magic money tree!" etc. But the fact is that all money has to be created and we create it through processes which make money creation as simple and inexpensive as possible. You could think of these processes as magic money trees, but I prefer to think of them as fountains of money that exist at the heart of all our economies. And they've really always been there.

I prefer the analogy of the fountain because money is a resource that, for most of us, must be returned if we go with our hands open (or a bucket) and ask for some. We 'take on a debt' - and we know that when we do that, those debts should be repaid. As you'll see, governments, in some circumstances, should be exceptions to that rule, but for everyone else, for ordinary people like you and me, money comes into being when we need it, on the condition - the legal condition - that we commit to paying it back.

Money - and thus our theoretical magic fountain - is effectively infinite. There's no real upper limit to the amount of money that could be created. And that of course presents us with a problem. If money creation were allowed to go on unrestrained, it would soon become extremely unstable. Money, then, must be carefully controlled. And insisting that most money created is returned (uncreated) again is a fundamental part of how we control it.

We can be reasonably sure that money will always be like this. Money is not and surely cannot be some kind of physical 'thing', something inconvenient and expensive to ship about the planet each and every time a transaction is made - only to be shipped straight back again when the next transaction is made in the other direction. Money inevitably resolves to weightless, easily transferable numbers (mere accounting) that can be sent and received all over the world with the minimum of fuss and expense. That's just an inevitable practical reality for money, as was assuredly discovered by those working, millennia ago, at the very beginning of the story of money and finance.