Nothing More Than a Communications Device 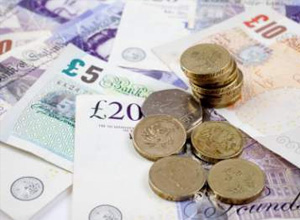 Physical notes and coins exist in the smallest number possible to facilitate day to day trades, to convey accounts information outside the banks' secure networks. In other words, they are simply durable, reasonably secure communications devices, carrying accounts information, hand-to-hand, across the economy. The materials of which modern money is made have no intrinsic value, you could not get anything for the paper or base metals out of which they are made. But neither are they supposed to, because they only exist to carry information. You could liken money to any other legal agreement that might be recorded on paper; the paper on which a contract is signed has no intrinsic value, its value lies in the information or agreement it memorializes.

Creating this kind of physical money, we would think, should be the responsibility of an accountable authority. The reason being that physical money represents the legal claim a bearer has on society, not its commensurate debt. Creating physical money free of its commensurate debt is, of course, the essence of counterfeiting (unless it is done democratically - see here). Equally, when precious metals figured to an extent within the physical money supply, accountable figures would have been expected to assure that such coins did in fact contain the weight and fineness of metals they purported to.

Today, as we move further and further away from cash handling and make ever more use of electronic payments systems, it becomes easier and easier to appreciate that physical money - banknotes and coins - makes up only a very small proportion of the total money supply. While the amount changes over time and fluctuates seasonally, physical money is kept in the smallest amounts required to get the job done, minimizing cash handling and storage risks and costs.

Let’s imagine that we have a new economy, with as yet no physical money. Of course, we wouldn’t be left to stand around, scratching our heads and unable to interact with each other, simply because we had no money. We know that money is created in the process of facilitating debts and enabling trade. And we know that we can make the economy work with no physical money, albeit with some limitations. If all transactions could be carried out by instruction alone (instructing banks to debit this account and credit that one, by, for example, checks, payment cards or online banking/payment services), then we would have a cashless economy in which conceivably vast amounts of trade could be carried on. Entirely cashless economies might be a little unrealistic, even for us today, but appreciating how such a system works enables us to understanding more clearly the role physical money really plays. The essence of money is, of course, debt - an entirely non-physical phenomenon itself. But occasionally we need some physical 'stuff' on which to convey that non-physical information.

Let's now imagine that a physical money stock has been created and delivered/sold into the banking system where people like you and me can get access to it. If I have a positive bank balance of £1000, it doesn't mean that there's £1000 of physical money sat in the bank (or anywhere else) just for me. If that were the case, for all of us, 100% of the money supply would have to be represented by physical notes and coins - the vast majority of it just sat there, expensively doing nothing, for no practical reason at all. In reality, if I have £1000 in my account, then there will likely be less than about £50 of physical money in existence to support it; such is our limited need for physical money. So long as enough physical money exists that if I need to make a cash withdrawal I will be able to, then the system will work. And so long as an unusual or unexpected number of others don't want to do the same thing at the same time, then all will be fine.

Now, when I make a cash withdrawal, I'm simply swapping the numbers in my account for pieces of paper with the numbers written on them instead. (You could liken it to 'buying' physical money with non-physical money.) It's the same information - my legal title/claim - I just now hold it in a physical form, in my own hand. I can then pass that legal title on to whomever I wish to. Should I deposit the cash back in my bank, that process would simply reverse, swapping/'selling' pieces of paper with numbers on them for numbers in my own bank account. The pieces of paper, then, will go on to be used by the next customer who comes to the bank wishing to make a withdrawal so they can hold their numbers on pieces of paper too.

So we can see that physical money really only exists to support the much larger body of money that is just numbers. That's something we should bear in mind when evaluating discussions about money and historical accounts which emphasize the physical medium and overlook the potentially far greater body of legal monetary claims and debts which underlie it.